The work I did for my Master thesis was just accepted in the Frontiers Journal (Frontiers in Human Neursocience).
I originally designed this experiment as a follow-up to a previous study I'd analyzed in the lab, which examined the network of brain cells involved in the Stroop task [When the name of a colour (e.g., "blue," "green," or "red") is printed in a colour not denoted by the name (e.g., the word "red" printed in blue ink instead of red ink), naming that colour is more difficult hence taking longer and more prone to errors].

The prefrontal cortex (PFC) has been implicated in higher order cognitive control of behaviour. Sometimes such control is executed through suppression of an unwanted response in order to avoid conflict which would otherwise occur as in situations when two simultaneously competing processes lead to different behavioural outcomes. 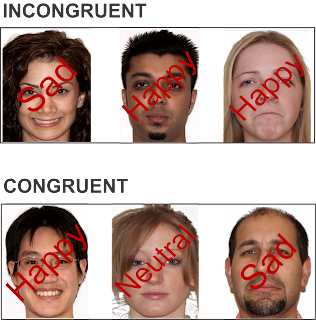 In this emotional Stroop paradigm, words were processed faster than face expressions with incongruent trials (faces with expressions different than the written emotional word across them) yielding longer reaction times (RT, the time it took for them to respond) and larger number of errors compared to the congruent trials (same face expression and superimposed emotional word). This is in fact counter-intuitive as we would expect reporting facial expressions to be faster since it is an instinctive behaviour. In contrast, word reading which is an over-learned behaviour is processed faster in our brains suggesting the formation of stronger neural associations.

Using fMRI (functional Magnetic Resonance Imaging), we were able to identify the brain regions involved in the inhibition of the two distinct automatic behaviours. The Stroop effect activated the anterior and inferior regions of the mPFC, namely the anterior cingulate cortex (ACC), inferior frontal gyrus (IFG) as well as the superior frontal gyrus. The left IFG showed particular sensitivity to face expressions as we observed significant hemodynamic signal (change in blood flow) differences between all three expressions of happy, neutral, and sad. Hence not only is there a suppression mechanism accounting for the higher signal intensity the incongruent trials but the particular face expressions presented within those trials also have an effect on this region’s activation.  It is possible that by attending to the facial expressions of the presented faces in the experiment, participants experienced those affective states by making inferences from the emotional faces. The presence of such experience is to be expected especially since half of the faces viewed by the participants in this study were of familiar individuals with whom they would have had personal acquaintances. The involvement of IFG in emotional empathy is evident through the lack of such ability in patients with lesions in this region (Shamay-Tsoory et al., 2009).

The findings in this study are the first to show such distinction between the processing of words and facial expressions both in our brains as well as in our behaviours. Further implications of our results are that dominant behaviours such as reading and recognition of face expressions are stimulus-dependent and perhaps hierarchical, hence recruiting distinct regions of the mPFC.

I presented the article: The Architecture of Reward Value Coding in the Human Orbitofrontal Cortex by Sescousse et al, 2010, JNeurosci. in our weekly journal club last week and will discuss a brief summary of it below.

Firstly, the reason I chose this particular article is due to the similarity in design to the experiment I'm in the midst of creating for my Ontario Problem Gambling Research Centre funded project.

So the main idea that is the make it or break it basis for this study is:
The dissociation between the so-called "primary" gratifications such as food or sex, which satisfy basic vital needs and have an innate value, and more "secondary" rewards such as money or power, which are not essential for survival and whose value is assessed by association with primary gratifications.
There is no doubt that such dissociation exists BUT whether the researchers are able to assess this using their experimental stimuli remains to be decided through their results.

Such postero-anterior axis has already been suggested to exist in the lateral prefrontal cortex (PFC), and some have also proposed that a hierarchical organization exists, whereby anterior frontal regions influence processing by posterior frontal regions during the realization of abstract action goals as motor acts (see review by: Badre & D'Esposito, 2009).

Overall, this is a very interesting study which could aid in better understanding of certain psychiatric disorders, including gambling addiction which are known to effect the OFC.
I will be designing a similar study in order to evaluate the effects of rewards in a gambling task requiring the suppression of an innate ability (the anti-saccade task).
Posted by NeuroShims at 10:33 AM No comments: